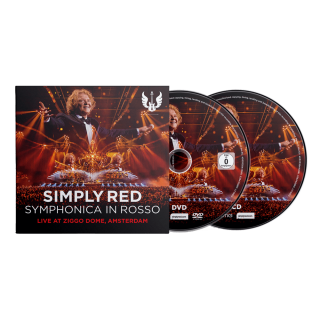 We are excited to announce the release of ‘Simply Red — Sym­phon­ica In Rosso’, the live album and DVD out Novem­ber 23rd.
Last Octo­ber Simply Red played three very spe­cial shows at Amsterdam’s Ziggo Dome accom­pan­ied by a 40-piece orches­tra. The set list beau­ti­fully show­cased their remark­able career includ­ing the clas­sic hits ‘Hold­ing Back The Years’, ‘Stars’, ‘Fair­ground’ and ‘If You Don’t Know Me By Now’.
Ahead of that release – for one night only on Novem­ber 12th, fans will have a unique oppor­tun­ity to exper­i­ence the con­cert in cinemas across the world on the big screen in stun­ning 5.1 sur­round sound.
The phys­ic­al release includes a hard back Deluxe format with 20 tracks across a double live album and live con­cert DVD (avail­able HERE).
The stand­ard ver­sion, (avail­able HERE), includes 15 tracks on CD plus live con­cert DVD, and the digit­al release includes all 20 live audio tracks from the night with the Con­cert Film also being avail­able to buy and down­load.